Saving Bug:
There is a bug where the game doesn't save players progress.
Is should be fixed now, but if it isn't, please comment.
If this happened to you, press U and A in the menu, and then refresh the page, then every level should be unlocked.
Also If you don't have cookies enabled, the progress saving won't work.

Level Completion Bug:
There is another bug where the player is able to complete a level without putting the correct blocks in the holes.
That should me fixed now, but if you manages to finish a level without completing it correctly, please comment.

Color Filler is a simple yet difficult grid-based puzzle game, where you try to fill in all the colored holes.

The first game-jam i ever participated in, was the first I Can't Draw But Want To Make A Game game-jam.
So when i saw that Charlmes was hosting a sequel, i had to join.
And i really glad i did!

I decided to remake/finish, the game i made for the first game-jam (Color Filler), as i really liked the concept, but didn't feel like it was polished or finished.

I MADE AN ERROR!

To the players that lost their progress, Press U and A in the menu, And refresh the page. Then all levels will be unlocked, and you can continue from where you were.

I hope you enjoy the game!
Thank you for playing!

Hey, I really enjoyed playing your Color Filler game. It was very challenging and had a unique premise. There were so many levels that had me stuck and it was just so much fun. When I got to level 20 I thought the game was over and even then I had so much fun already, but when I realized the game was over double the size I thought, it was awesome. I would've paid money to play this on steam, or other websites, but being able to play it for free was awesome. I did play it on coolmathgames.com. I don't really think that supports you so I'm going to play it again on itch.io. They didn't really give you credit on CoolMathGames so I had to look you up. I really wanted to say how fun this game was and if you still are making games somewhere else I would love to play some more. This is probably going to be one of my top puzzle games of all time, up there with Baba is You and Return of the Obra Dinn. I hope your still making games and I hope you are doing well.

Will you have an apk of this cool looking game?

Thank you for the extra levels!

That was very enjoyable and relaxing. Easy to control and made sense.

Great game! I loved the twist of adding/removing walkable tiles from the box-pushing puzzles! It’s a really nice mechanic, congrats!

very clever puzzle game! theres just a few things i would change. allow for unlimited undos. alllow players to mess around and undo their mistakes . i would also make the square move if you hold down the move keys. lastly i would make the undo button close to wasd, maybe e or q.

I found a bug with the undo button. If you push a block into a hole and then undo, the block stays there. It may actually be a bug with the disappearing platforms, because undoing a move after moving off of one causes weird things to happen. I haven't tested if it's always the case, or only if you move off a disappearing platform and push a block into a hole at the same time.

Edit: It's definitely only when both things happen at the same time. The undo button brings back the platform fine if it's just disappeared, and pulls the box out of the hole if you just pushed it in, except when it tries to do both at once.

Edit 2: This is a very elusive glitch. I only noticed it a couple of times and I don't remember where, but now when I try to replicate it, it won't happen again. Basically the player block would end up in midair where the removed platform was, but it wouldn't come back, and sometimes a block that had landed in a hole wouldn't come out. You can have a hunt if you'd like, but I can't figure out anything more.

Reply
Nat the Chicken2 years ago(+1)

save still not working :((

What browser are you using, and have you enabled cookies?

Hmmmm... I am also using Chrome, but I don't have any problems. I will look into it soon.

I think the problem is really fixed this time.

Is it possible for you to test it again?

YES! Thanks for making it work this time.

Loved the original but there seems to be a bug in this one as the game lets me put any colour block in any hole.

Yes, sorry, I will try to fix that today.

I'm not sure how it happened.

a lot of fun, thanks! got stuck on level 41 and then browser crashed... starting over now!

I'm sorry to hear it didn't save.

If click on U and A in the menu, and then refresh the page. It should unlock all levels.

Then you can continue from where you were.

Super polished game here. I really enjoyed it. The music was amazing! You did a great job on tying it all together. I made it to level 14 and got stumped. I would have loved to complete it and have a screenshot for you but I'm not smart enough lol

Very cool game, but I got to level 27 and then the next day accidentally  clicked "new game" and all the progress was instantly lost without warning :(

Yeah, you are not the only one. i will fix it now.

This game is a lot of fun

very well done....its a tough one.

Thank you very much!

The grey block doesn't have to go into the grey hole.

I think i need to add a lvl that explains that to the player, as it isn't that obvious. 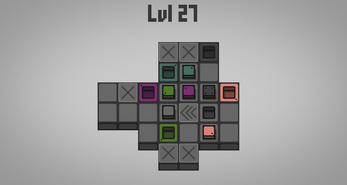 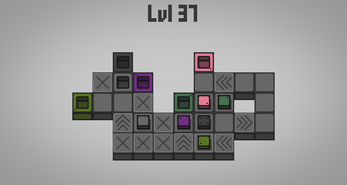 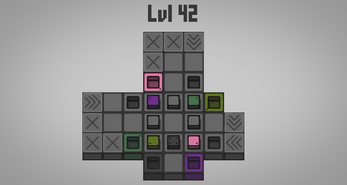 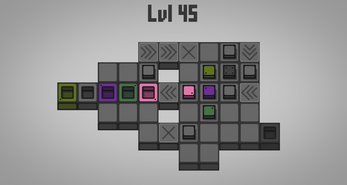